The eye is extremely important for most people, including me.

The visual perception of our world, but may prove to be tricky, since what we see is just the result at the end of an equation that takes into account almost everything.

We can see because light falls on the things that we consider. The light gives things a color that affects us. It creates an atmosphere and trigger emotions in us. The light that we need is like the salt in the soup, you still need to consummate an indescribable flavor.

It arises the impression, in the viewer, that things are on their own as they are, without any help of other factors. The chair is brown because the wood is brown on its own, and not because the light in which we see the chair or the wood, both appear as brown.

It is natural that one looks inevitable in use of light at something, but it seems that the kind of light is no longer relevant.

For many people it does not matter whether they look at a photo, or even a real object, for the recognition factor remains the same. It has been neglected, that our cameras give us a different picture than what we would see if we were there. The camera sees things that we can not see and vice versa. It shows us images that we never would have seen without its help. It adds, however, like any creative means, of their characteristic in the image. It is inevitable that that happens, and what we see is, again, only the sum at the end of a new equation.

If we start here from matter, that is the object of our consideration, I would like to mention that I have them here divided into four groups.

As the "living matter" would be, animals, plants, organisms that can develop in the process of living. The "dead matter" such as rocks, and crystals. This is the first half of our natural deposits. We, as human beeings design and build machines and take advantage of our natural recources for this purpose. We explore the nature and take a leaf out of it's book in the aspect of its efficiency.  Accordingly, we create matter out of the two first groups. This is the third group: the matter we create.

The last and fourth category describes something, that we know as dark matter. It makes up 95% of our universe and is invisible, according to the scientists.

These four groups are represented by symbols: the "living matter" through an egg, symbolizes  life, growth and fertility, the "dead matter" by a tetrahedron. The Gömböc is the symbol of created matter, especially the one that rely on nature. This is an object that Gábor Domokos and Péter Várkonyi, his colleague, have calculated in 2007. It is a figure that has only one stable and one unstable point. The Gömböc was built for verification's sake. Because it existed only as a formula, they printed the object with a 3D printer.

When they saw that this form had relatives in the nature, they looked for the form that filled the vast majority of these properties.

The Gömböc is the first known convex, homogeneous object to have just one stable and one unstable equilibrium point. It is easy to prove that objects with less than two equilibria do not exist. The existence of the Gömböc was conjectured in 1995 by one of the greatest living mathematicians, Vladimir Igorevich Arnold.

The flatness and thinness of any object can be measured mathematically by a numerical value greater or equal than one. The flatness and thinness of the sphere is equal to one. It has been proven that the only other geometric form having this property is the Gömböc, thus the Gömböc is the most sphere-like object. Because of its similarity to the sphere, the Gömböc is one of the most sensitive geometric forms. It does not exist in the non-organic environment (pebbles), because the constant erosion changes the number of its balance points. The organic environment, however, managed to produce a Gömböc-like shape in the form of the shell of the Indian Star Tortoise.

The symbol of the fourth group is the "dark matter" as it was in the media, according to the latest research results presentation. It is the model, of what we do not see, but believe. The idea before its realisation, can also be symbolised by this model.

These four symbols are embedded in glass. Glass is inside them and same wraps them. The idea to present matter in such a fragile way, just as a veil that is thrown over an object, occured to me through the definitions of quantum physics.

Accordingly, the matter consists mainly of air and only a very small part is actually tangible. If one looks at the chair on which one sits, the discrepancy arises that what is proved, and what we perceive seems to be incompatible.

So even if the idea of invisible, then appears as an object and we compare it with the idea it claims to be, we will not have to be satisfied at first glance.

Do we now trust the concept, or what we see? But what if a tool, created by us, which has always served us well, suddenly provides a different picture than we see? Is it then two against one?

The images for this work are photographs, close-ups of the interior of these cubes. The photographs are modified, by a program, in a way that reinforces the existing color information of the images to highlight what the view through the camera shows us. So to see that with the naked eye, would not be possible for us. They show us the structure of the points that have been caused by the laser in the production of damaging the glass structure. They show us the light in which we see everything, the color spectrum, resulting in daylight.

What ideas can still be trusted, therefore, one may or may not believe his own perception?

Can we trust the masses that define what exactly is our objective truth about our perception?

Is there such a thing? And can we possibly think about all this, under a different light?

pictures of the exhibition in Heiligenkreuzerhof "sala terena" from Peter Chiu: 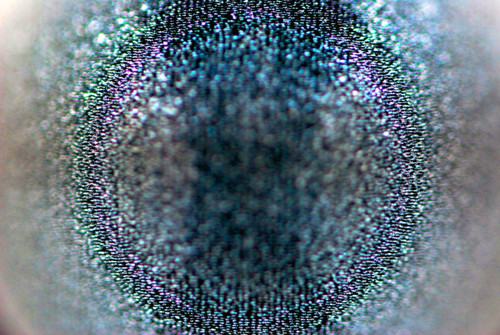 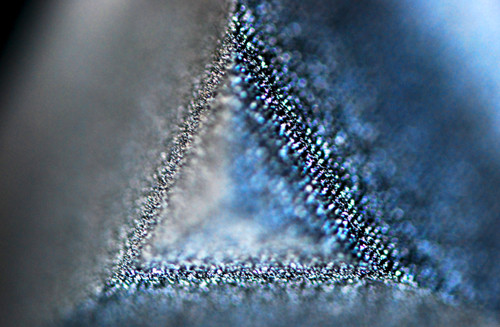 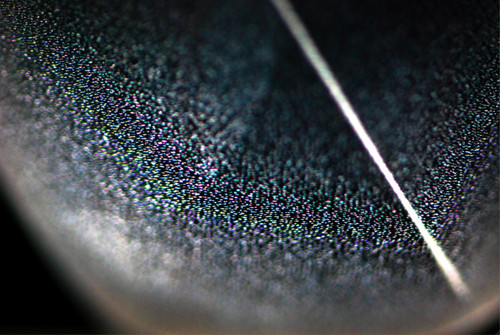 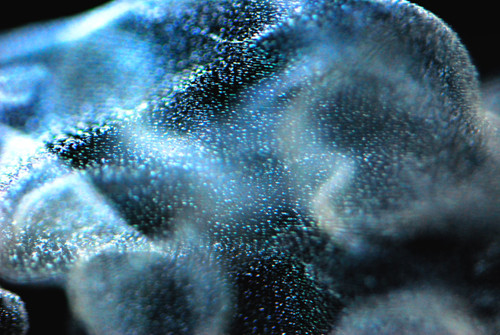 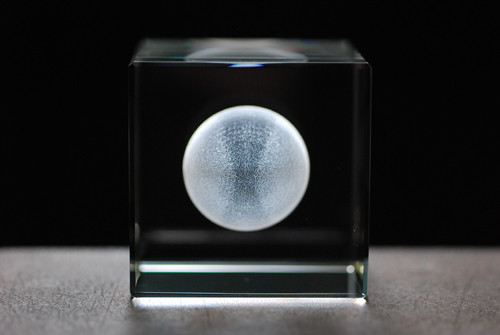 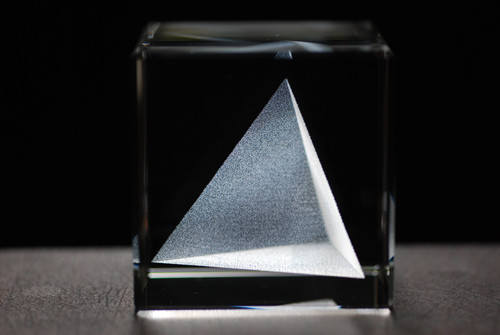 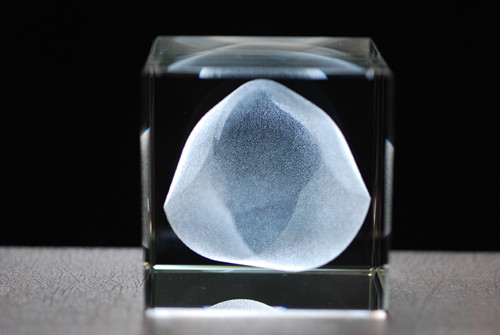 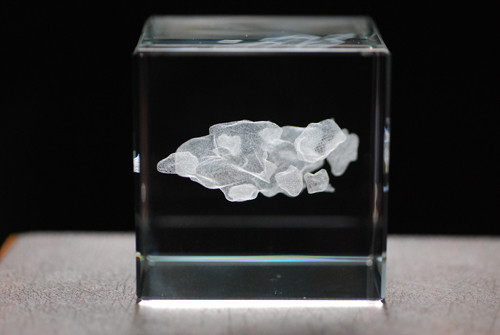 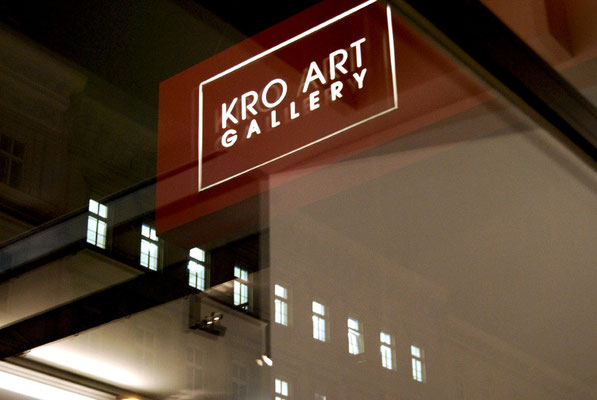 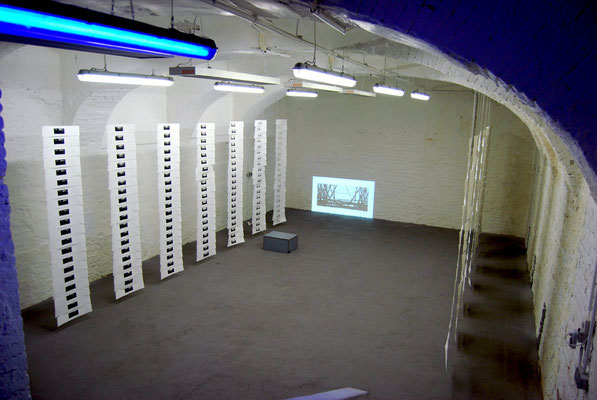 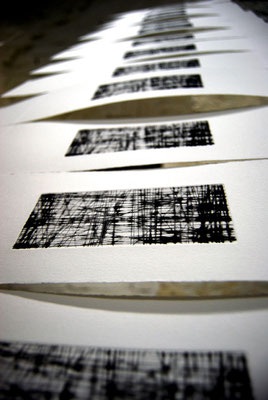 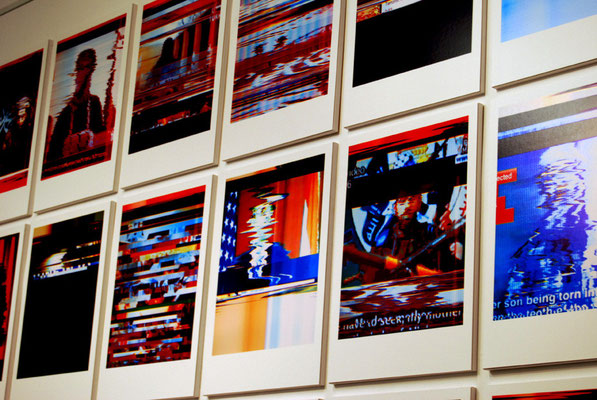 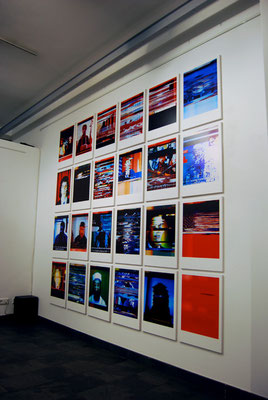 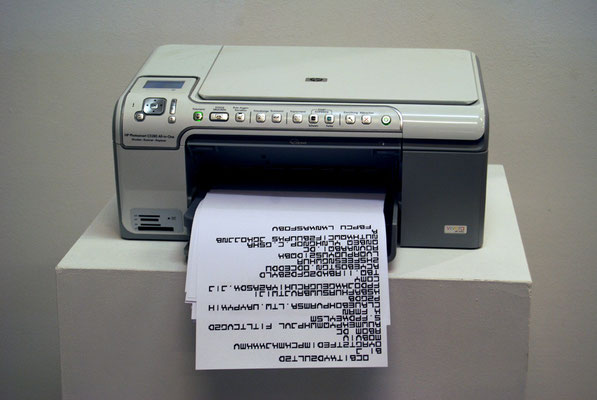 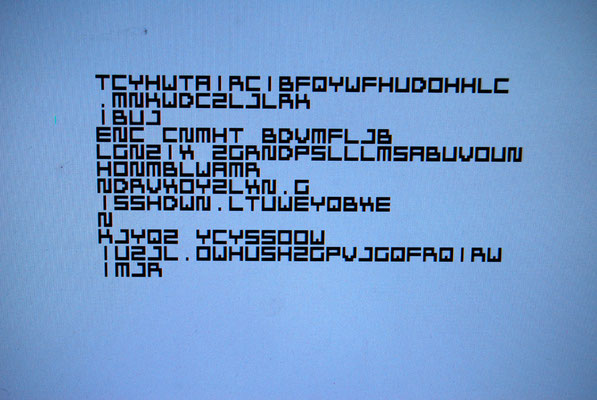 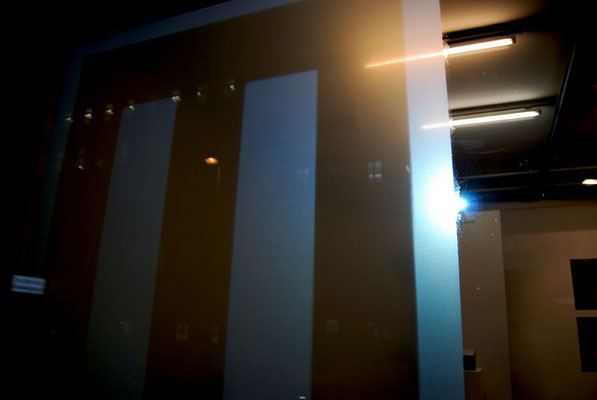 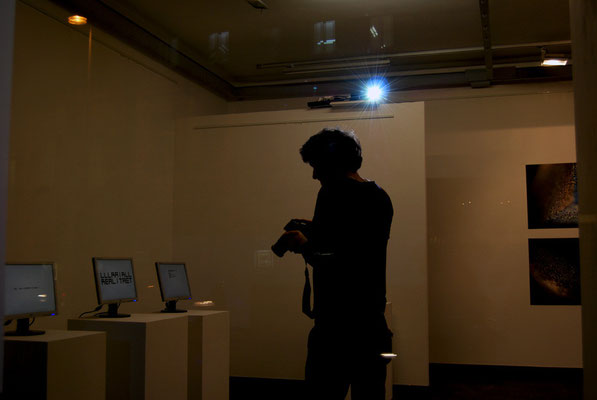 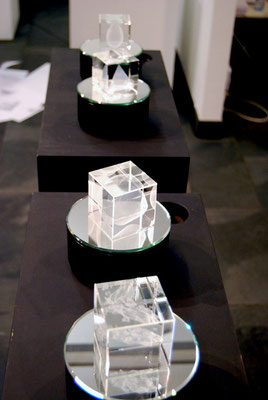 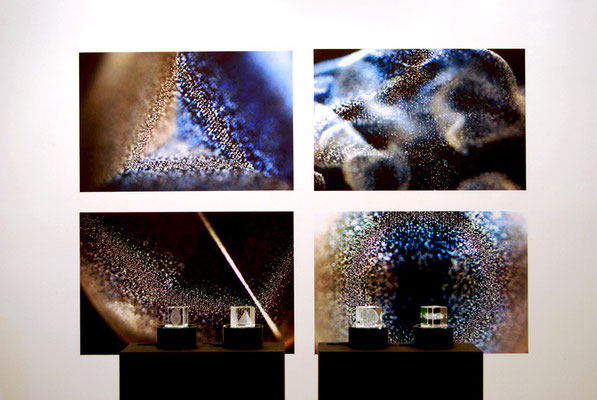 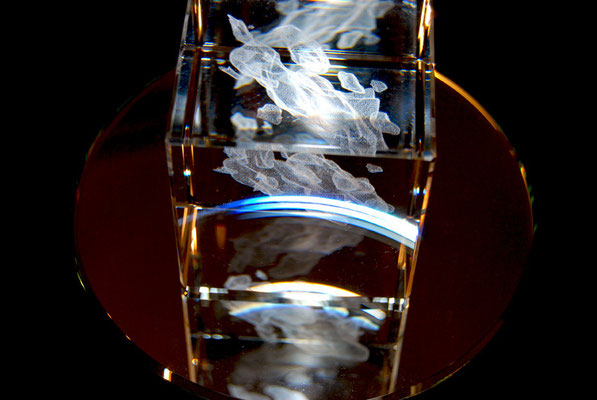 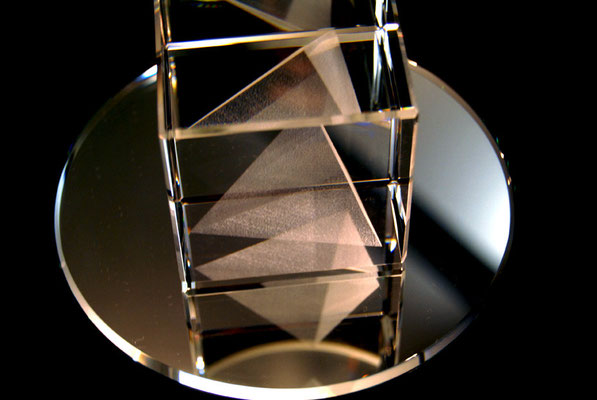 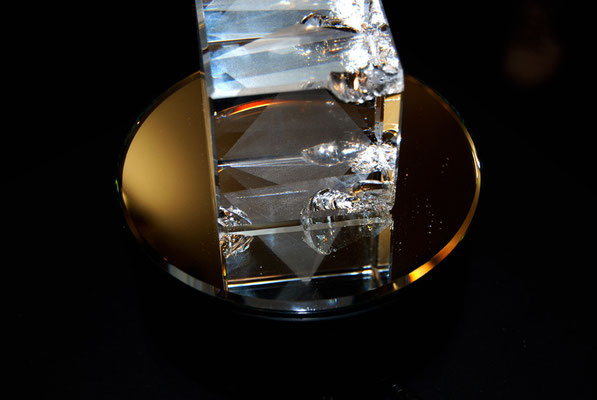 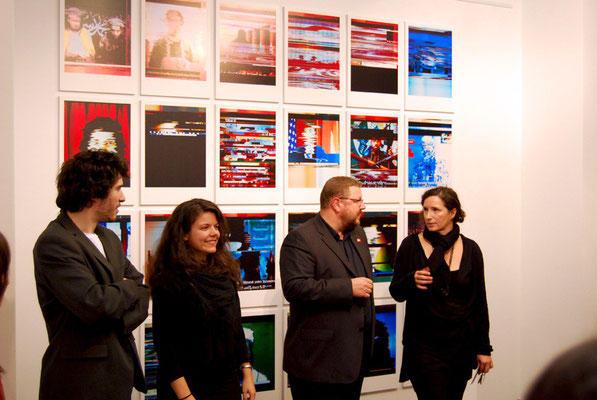 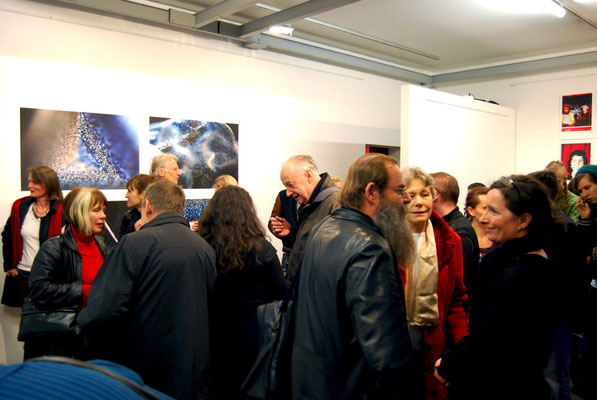 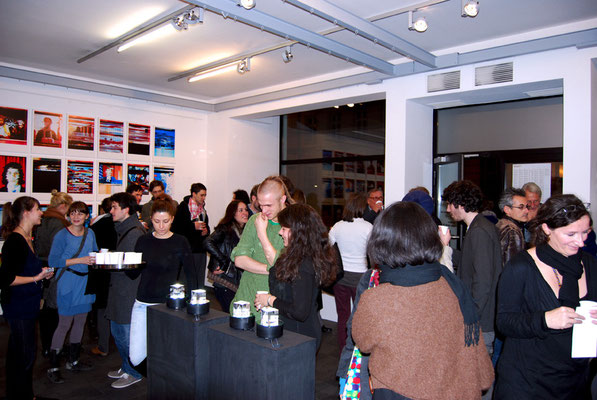 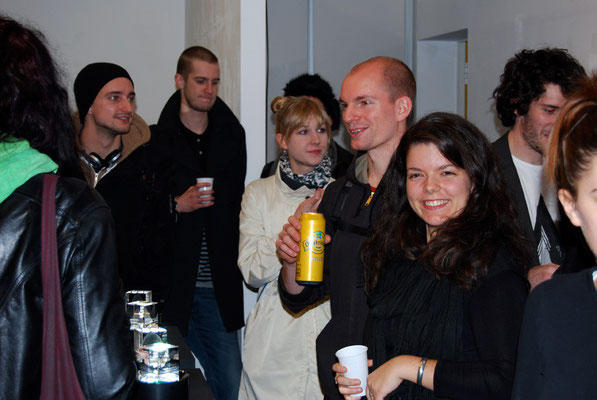 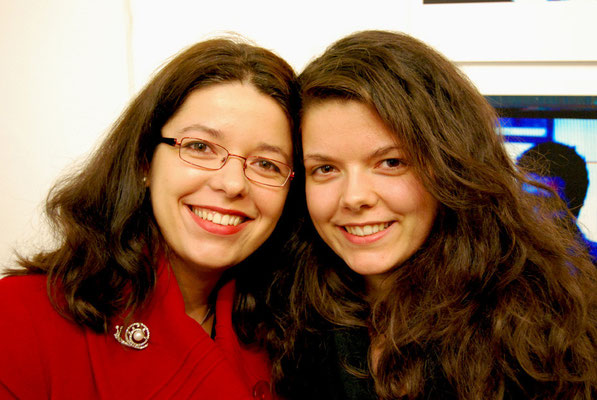